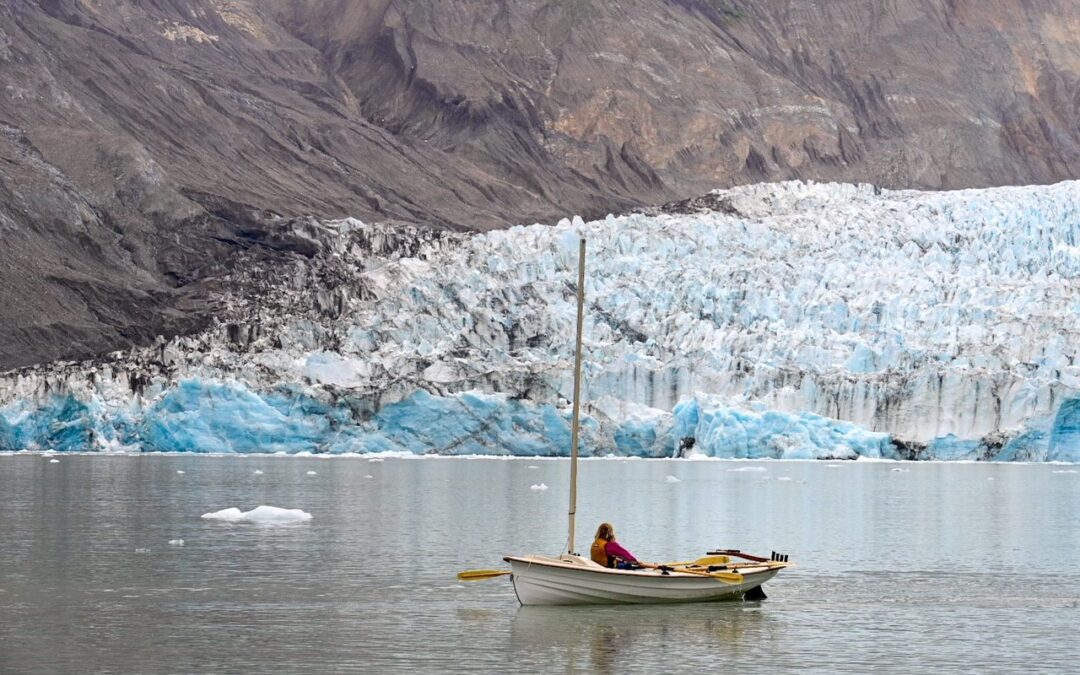 This is our latest dispatch from Fredrik and Nancy, as they explore the waters of SE Alaska in their new Salish Voyager sailboat— now 45 days and 280 nautical miles into their trip. They launched from Haines in late June, stopping in Gustavus en route to Glacier Bay in July. Fredrik and Nancy have just returned to wi-fi service and sent us these updates of their time in Glacier Bay!

A rare weather set up, with a high pressure system over the Gulf of Alaska and a low in interior Canada, blessed the early part of the trip with warm sunny days and cursed us with strong southerly headwinds. Most of our biggest adventures revolved around making sure Wild Places was safe for the night. We experimented with everything from rolling her up the beach and anchoring off shore, to dragging her up a river.

On our last day coming into Gustavus we were sweetly sailing upwind, making wide 90 degree turns, when progress in relation to the shore suddenly came to a halt. The opposing current had efficiently cancelled out a brisk 10+ knot wind.  We pulled into a nook, dropped sail and rowed close to shore making use of the eddies. Once we were directly across the channel from Gustavus we hoisted sail once again and breezed into town.

In Glacier Bay, we were blessed with exceptionally warm sunny weather and miles of enjoyable rowing on glassy calm seas, punctuated by occasional light winds for sailing. With a couple of cycles of spring and neap tides behind us, we are getting accustomed to resting the boat safely, either at anchor or on the shore, at night.

It was a delight to get away from the motor noise of fishing season and loud Forth of July celebrations. At night we listened to the sounds of birds, and often had the kind of quiet where you can hear sea otters crunching on urchins.

One morning, we crawled around on our hands and knees like bears, grazing a rich bed of wild strawberries—the taste of sweet summer sunshine turned to sugar. I could hardly believe our luck. Forty minutes later, we were looking at a two foot wide jagged pile of rocks that separated us from our destination. The “tickle”—a narrow passage open only at certain tide levels—was closed. We stared in disbelief. Our chart clearly showed this passage as non-tidal. A serious bout of kayaker envy took over, as we realized a portage was not in our repertoire.

As we turned to start the five mile row around, I realized, our chart was made nearly a decade ago. The land along this bay is uplifting at nearly an inch a year as the earth’s crust is rebounding with the release of the tremendous weight of glaciers. Only 200 years ago, the area we were paddling in was covered with ice. It was exactly those 200 year old ocean beaches, now raised well above tideline, that provided the perfect habitat for the strawberry extravaganza that distracted us in the first place.

At the far end of Adam’s Inlet, one of the more remote parts of the bay, thousands of Vancouver Canada geese were gathered to complete their molt in peace. According to our map we were only 25 miles from Haines as the raven flies. We were a month and 180 nautical miles of coastline into our trip. We were not significantly closer to Gig Harbor than when left Haines. Somehow, this is not a surprise to me. Anyone who has read, “Riding Into the Heart of Patagonia,” knows that north south marches are not my forte. Fredrik and I have coined the term “Adventure Unracing,” for how we like to travel, i.e. slowly, experiencing the place in depth. We also like to catch, pick and eat as much wild food as possible, and make great meals for ourselves.

In Glacier Bay, we lived with whales.

There were Humpback whales at breakfast, whales at dinner. We fell asleep to deep breathing, and listened to other worldly sounds in the night. One day, we rounded a point in glassy calm conditions. There were whales ahead of us, and whales behind us.

Park service regulations require us to stay a quarter mile away from whales. We are forbidden from approaching them. The purpose of their regulations is to prevent people, primarily in motorboats, from bothering and potentially harming the whales. However, we could not move away from one whale without moving toward another. We laughed out loud at the completely ludicrous situation we were in.

Thanks to the shallow draft of the Salish Voyager we were able pull inside the kelp line, into less than two feet of water, and wait. We were rewarded with whales feeding and diving in front of huge glaciated peaks. Whales went on about the business of being whales, while we watched in awe, so close we could see the baleen inside of their mouth as they surfaced for a gulp of fish.

There aren’t nearly as many tidewater glaciers in Glacier Bay as I had imagined after reading about John Muir’s travels in this country in 1879. Still, unlike Glacier National Park in Montana, Glacier Bay is not in danger of running out of glaciers in the foreseeable future. 15,300 foot tall mount Fairweather rises from the northwest corner of the park.

As we worked our way to the back of the fjord, the landscape became more and more alpine. Grizzly bears roamed the intertidal area at low tide, far less interested in us and our boat than they were in turning over rocks in search of crustaceans and munching on barnacles.

Yellow Dryas colonized the newly exposed land, with alder, willow and cottonwood not far behind. Looking deep into the fjord, and seeing mostly rock, I can understand why disoriented tourists sometimes ask what altitude they are at, while sitting on a boat in the ocean.

After waiting for slack tide, Fredrik and I rowed into the Glacier lagoon, one of us on the oars and one looking forward steering with the tiller to avoid icebergs. Black-legged Kittiwakes were clustered on cliffside nesting colonies as we avoided disturbing seals dozing on ice bergs. Giving the calving glacier plenty of space for safety we went as close as we dared to the blue wall of ice. After having the magic experience of being near tidewater glaciers so many times in my kayak, I was thrilled to find out I could repeat it in the Salish Voyager.

An intense trip back around Point Gustavus

Our time in Glacier Bay was a vacation compared with the Gustavus leg of our journey.

Because this exposed point is known for intense tide rips, we had done our homework. When we were in Gustavus on the way out, we had enjoyed the privilege of spending an afternoon stacking wood and talking with lifelong locals who had transited this point many times in kayaks and skiffs. Armed with a current tide table that set slack current for 1:30 p.m. and a weather forecast that promised the west winds would be diminishing, we headed out.

A breeze became a wind and ripples became waves well before we reached the point. Both the wind and a strong current were set against us. Just before the point we pulled off on a small beach to re-evaluate. The wind and sea state were intensifying rather than diminishing. Not wanting to loose the hard earned miles of the morning, we decided to stay where we were. The beach we were on worked for us at low tide, but at mid-tide it was a rocky mess. Three hours later we could be dealing with a loaded boat on a rocky beach in big surf if we didn’t figure something out.

Trying to come up with a solution, Fredrik suggested anchoring off shore in less than favorable conditions. I was hesitant to leave the boat bobbing in what could soon be huge waves. The clincher came when Fredrik noticed the tremendous piles of kelp washed ashore from the most recent high tide. This mass of vegetation meant anchoring off would be a disaster. Beaten at the game, we headed back in. A strong following sea and one near-broach taught us what the Salish Voyager can do, as well as what conditions we should best avoid in the future.

Every nasty point has its sweet calm moment. We were glad we waited. The next day we were on the water at 7 a.m. to hit the morning slack. We were treated to a favorable current and calm winds. Rounding the point we were relaxed enough to take photos. A raft of what looked like a thousand sea otters bobbed off the point, and we were treated to getting to watch three wolves trotting the beach on the way into Gustavus.

The Salish Voyager is working out great for our purposes.

We can bring everything that we need for long periods away from town. We are learning to adjust our agenda to the cycles of nature, to leave at high tide even if that is at a time we would rather be sleeping. Timing our travel for ease of getting the boat off the beach, with a favorable current for the day—while avoiding strong winds and heavy sea states—makes every day a little different.

Fredrik and Nancy will be continuing to send us dispatches as they make their way south (with some longer stops along the way as they hole up when winter weather sets in). Nancy is an author and you can read more about her work at www.ridingintotheheartofpatagonia.com. Fredrik is a professional photographer and you can see more of his work at www.Norrsell.com. Stay tuned to follow along their journey, and in the meantime learn more here about the Salish Voyager!