What’s the difference between the Jersey Skiff and the Melonseed? 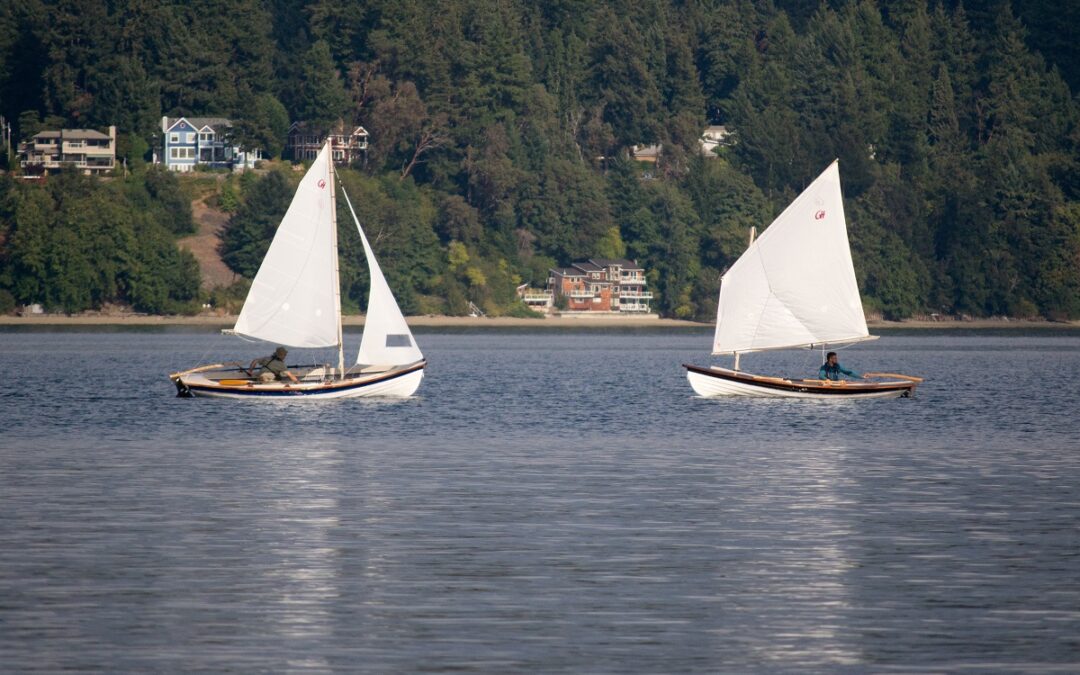 One of the most common questions we get is, “What’s the difference between the Jersey Skiff and the Melonseed?” In order to understand the difference, we need to dig into their heritage as working vessels on the Eastern Seaboard.

Our boats are modern reproductions of boats used during the days of working sail. Back in the 1800s, even the 1700s, many times the boat was used by the same person who built it. The builder would try a lot of different designs . . . a fat one, a skinny one, a round one, a long one . . . and test them out in real working conditions.

For example, if you sit down to a computer plotter today, and you design the fastest human-powered load-carrying boat that you can, you come up with a boat that’s remarkably similar to the Jersey Skiff.

The Jersey Skiff – a salvage boat design from the Jersey Shore 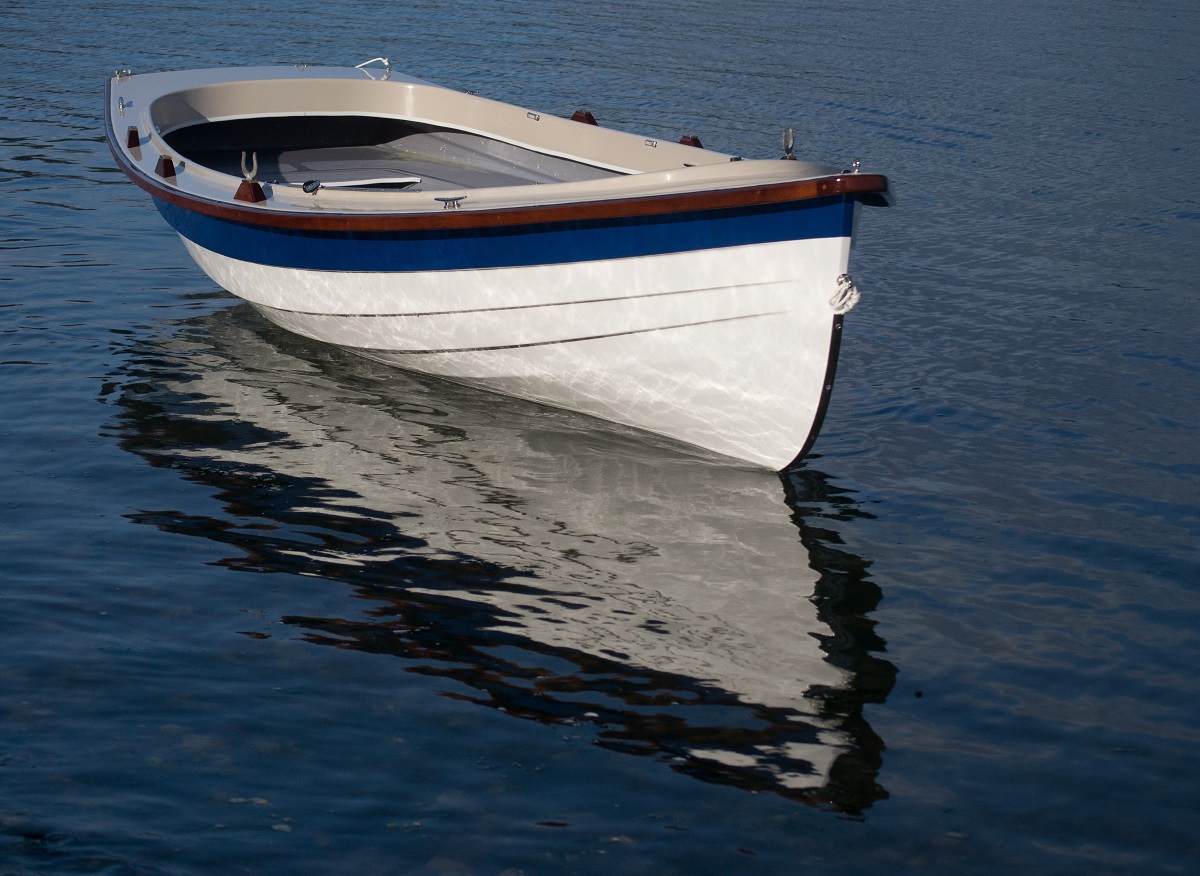 An important function of this work was that these boats were pulled up on a beach. So this boat has a “box keel” amidships. When you pull the boat up on the beach, it has a flat place so the boat sits nice and flat. If you need to work in the boat, you have a flat place to stand. If you want to fish, you can cast, you’ve got a flat place for your feet, you can pull crab pots, you’ve actually got a working surface inside the boat.

This underside view of the Jersey Skiff shows the flat box keel.

This box keel feature also gives you a pivoting surface. If you’ve got a long, narrow keel like on some other designs, the boat goes really straight… but it won’t turn. The Jersey Skiff tracks really well… fine bow, fine stern, but the flat bottom gives you more agility when you’re sailing. This means that when you want to tack, the boat pivots and tacks beautifully. It never goes into irons, giving you really nice control when you’re underway.

The Melonseed – a rowboat from the Chesapeake 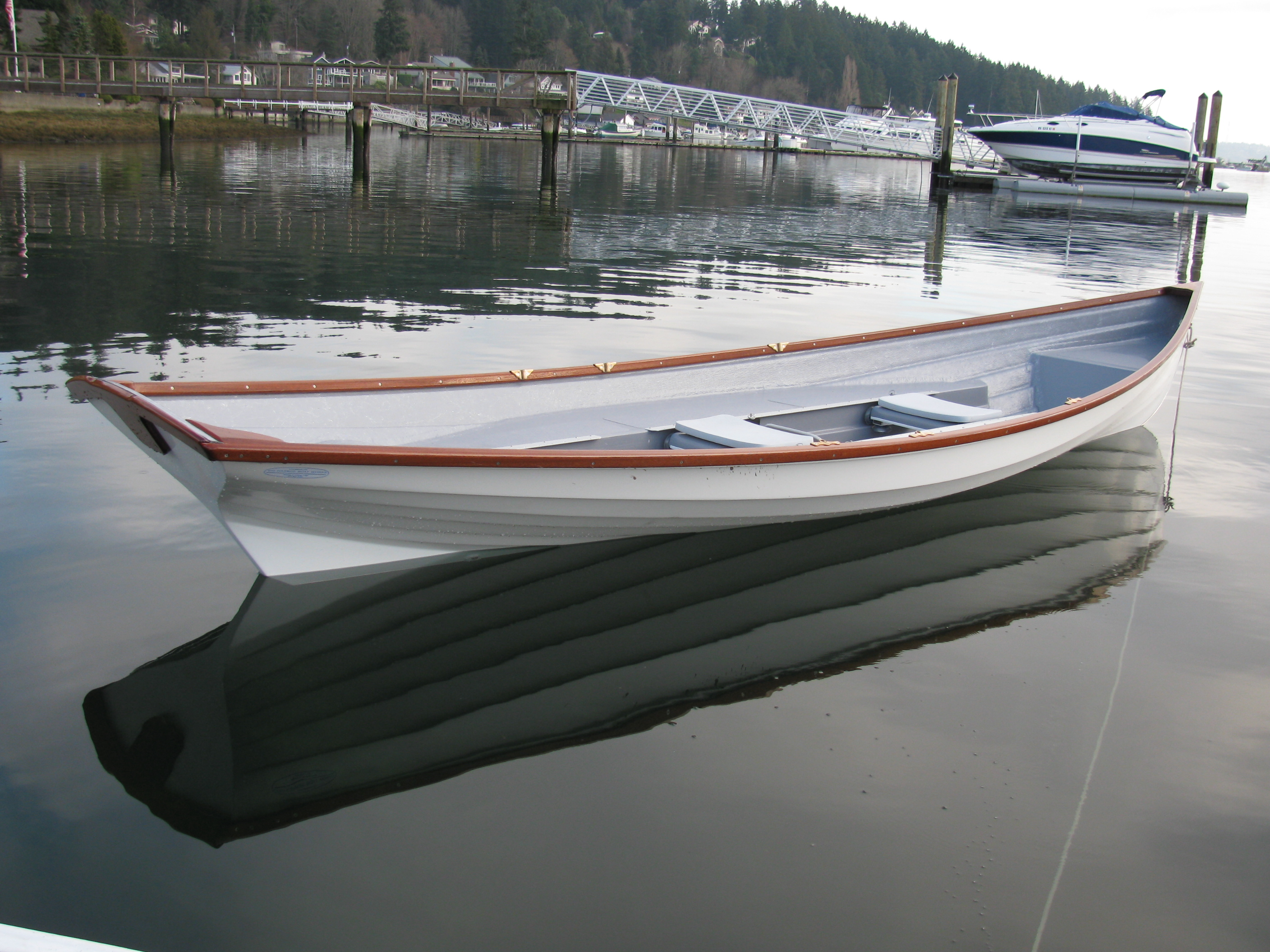 The open rowboat version of the Melonseed

The Jersey Skiff was the first boat designed with this particular box keel feature. But in the Chesapeake and in some of the estuaries, the lobstermen and oystermen were primarily rowers . . . not sailors.

So they built their boats from that same box-keel shape, but optimized it for their work as rowers. They took the same basic hull form and built it with a lower gunnel. That boat became the Melonseed.

The underside of the Melonseed shows a box keel like the Jersey Skiff.

The Melonseed was originally designed as a rowboat open to the gunnel, with no deck as shown in the top image above. If you’re primarily going to be rowing, that’s all you want it for, that’s still probably the best form to get because it has more play inside the boat. But if you take a boat with this open hull form and try to make it sail, with this relatively low freeboard it would take water in when it heels under sail.

The Melonseed with an added deck makes it suitable for sailing.

So when we redesigned the Melonseed as a sailboat, we decked over the entire boat, so now you’re basically sailing a giant bubble. Even if the deck tips below water, it’s full of air and will just pop right back to the surface again. This makes it one of the safest boats we build, even though it has a relatively low freeboard. 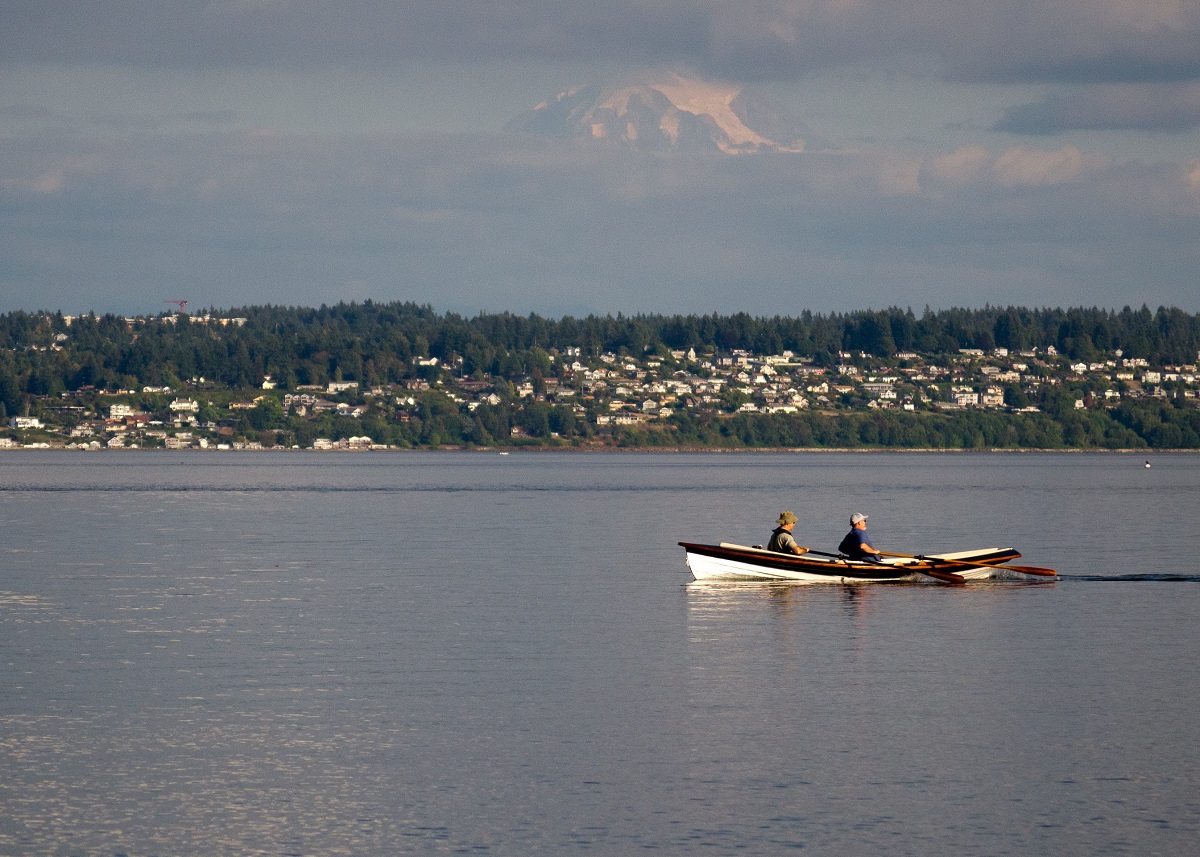 Over many years, people came to us wanting a tandem sliding seat rowboat that they could also sail. But with a typical sail rig like the Jersey Skiff has, your mast has to be in a position that’s integral with your front seat. You can’t make that seat move because it has to be firmly fixed for the sail rig.

So we adapted the Melonseed with a balanced lug rig that has the mast all the way forward, and then we completely opened up the interior so we have enough space for tandem sliding seats. The result is smooth, powerful tandem sliding seats with a very functional sail rig.

And then, we took those designs a bit further by blending the modern with the traditional. The traditional element is a very true shape, taken from the wooden boat and what’s called the Table of Offsets. We use that to build one perfect wood boat, and then we take a mold off of that.

Then we modernize the boat by taking that same traditional form and building it out of fiberglass and composites, even Kevlar in some boats. This way they are easier to maintain, and they turn out much lighter than the original. Which means the boat can carry more weight, because the buoyancy of the boat no longer needs to support itself… that buoyancy can be directed toward supporting the weight that you want to carry.

Hydrodynamically speaking, the Jersey Skiff and the Melonseed have almost exactly the same hull speed, because a fish looking up at both boats sees the same thing. They’re essentially the same boat at the waterline.

“So why do you have two different models? Why not decide on just one?”

While these models share a common heritage, they have different functionalities for the modern boater. Which one appeals to you more will depend on how you picture yourself using your boat. You can compare them to a sports car and an SUV . . . both great for their own purposes, but depending on how you live your life you may prefer one over the other.

The Melonseed is like the sports car… it’s FAST. It’s like an aquatic Porsche. It’s designed for fast, for fun, and it carries two people. With the freeboard it has, and the sail design, it just works best with two people. You put more weight into it, it just kind of bogs it down a little.

If you’re primarily thinking about a boat that you can row, and sail on occasion, and you don’t plan on taking out more than two people at once, you’re looking at a Melonseed.

The Jersey Skiff is like your SUV. It has more utility if you have more people or cargo to move around, but are still looking to have a good time as you get from place to place. In identical conditions it will be *almost* as fast as a Melonseed, but because it’s heavier, that’s going to slow it down a little bit.

If you’re thinking about a boat that you primarily sail and want to row on occasion, or you need a higher carrying capacity, then you want to look at the Jersey Skiff.

But unlike visiting a car lot, we don’t try to push a boat onto anyone. We just ask what YOU want the boat for, because once you understand how the boat fits what you want to do, the decision almost makes itself. And regardless of which one you choose, you’re getting a boat that’s really fun to use. Simple, efficient, powerful . . . and pretty too.

See the difference in our video: “A Common Heritage”

Want some help visualizing all of this? Check out the video with our founder Dave as he points out these features out on the shore at Fox Island, and see what these boats look like on the water.