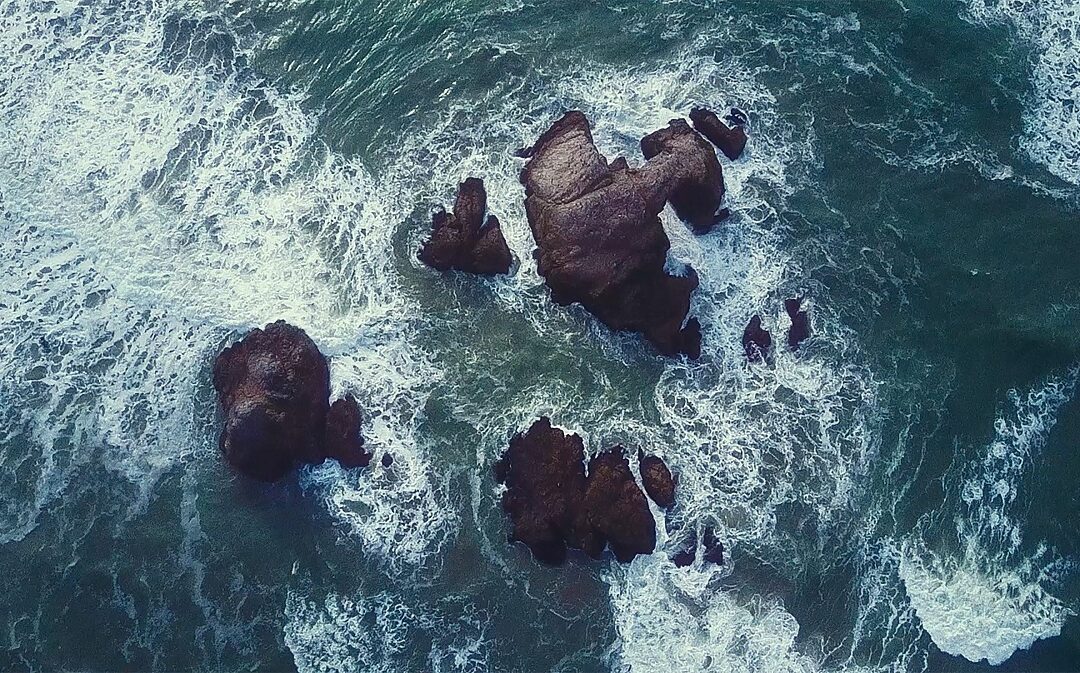 This is a story about a lifeboat . . . but not in the traditional sense. Sea Stories aren’t always about epic adventures across the oceans. Some of them are humble tales of love, family, and resilience, demonstrating just how much the water connects and restores us. Today we have the honor of sharing an inspiring story of a little boat that came to mean much more than meets the eye.

Janet Lassen of Sheridan, Wyoming, wouldn’t have guessed that her life’s journey would move her so far inland. “It’s still hard to get used to the mountain and prairie winds and lightning,” she says.

Raised in Oregon, Janet was the daughter of a Danish-American carpenter who built racing boats and competed with them in Astoria back in the 1950s and ‘60s. Janet remembers it as a time when there was still a pier in Astoria that went out into the Columbia River.

“He built a bar tender with a jet engine in our front yard in Eugene in the later 60s,” Janet says. “I remember him steaming the wood to bend it in a 50 gallon drum, and turning over the hull with his ancient fork lift.”

Janet spent her summers on fishing trips along the Oregon coast with her five siblings. It’s little wonder, then, that she chose to follow her heart into a 15-year career fishing on boats in Alaska.

“I was a skiff man in Kodiak for many years, started power trolling in Sitka, and later worked crabbing at Dutch Harbor.”

But when Janet was 37 years old, tragedy struck. Most of us are aware now of how dangerous the Alaska fishing industry is . . . and when Janet was four months pregnant, the baby’s father was killed while crabbing in the Bering Sea, along with his brother on another boat. His story would later be told on the Discovery channel TV show The Deadliest Catch – season 1, episode 5.

The impact on Janet was both emotional and financial. Somehow Janet persisted and went after her 100-ton license and radar endorsement, which she completed shortly before her son was born. But she never went out to sea again.

Back in Oregon to regroup and focus on raising her newborn son, Janet found a good deal on a used Point Defiance sailboat that would soon become an important part of her life.

“One of the best last memories is of my Dad, myself, and my about 2 year old son out on Coffenbury Lake by Astoria,” Janet says. “He thought it was a good little boat.”

Janet shared a picture with us from that outing that remains special to her to this day. Soon after it was taken, they would learn that her father had cancer.

“Here he is 75, right before he learned he had terminal cancer and died later the same year. My little skiff carries precious life history that continues on.”

Janet says she cant help but laugh when she sees her Dad in his “ancient life vest.”

The cancer diagnosis meant that Janet soon had to sacrifice her dear little Point Defiance skiff, selling it to a bar pilot in Astoria in order to raise the funds to move back to Eugene and be near her father.  She stayed close by until he passed away.

Even the darkest times, though, don’t last forever. A couple of years later, fortune turned and Janet was able to buy the boat back. When she moved east, to the Northern Cheyenne Reservation, she had the little boat in tow.

Things were finally looking up, but there were still some rough waters ahead. Or make that . . . icy waters.

“I moved to the Cheyenne reservation to work in the school with my 7-year-old. I didn’t get my Point Defiance skiff pulled far enough out of the water. . . I really wrecked it by leaving it too close to the lake and not checking on it. The water came up, and in Montana it can get to -40 below with wind chill if it wants to. Ice got it. Stupid of me really, but that’s what working full-time, going to graduate school full-time, and raising my spirited boy on $10 an hour will do for me. Too busy to get to everything at the time.”

The damage was severe. The stern was badly cracked. And toward the rear of the port side, the top two strakes were ripped away entirely. It looked like the little skiff would never sail again.

But from all her time around boats, Janet knew that fiberglass repairs were possible. With a boat damaged this badly, however, it would take a true artist to be able to bring it back to life.

Little did she know that she would someday find just such a fiberglass craftsman—in Billings, Montana, of all places.

“Philippe Naudet, the fiberglass man, was in the America’s Cup race 2x, grew up in France, and ended up in Billings, Montana, a long way from the sea and his past life as I had. I will always be grateful to him for doing the repairs!”

To look at the before and after photos, Philippe really did amazing work. 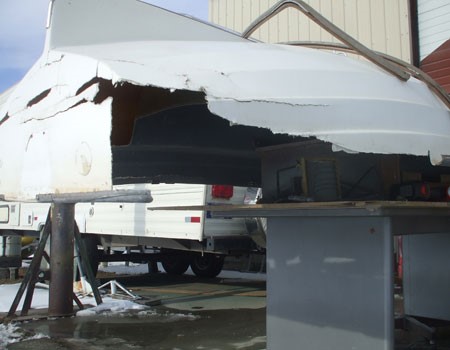 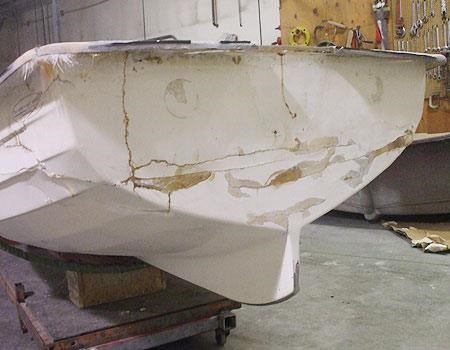 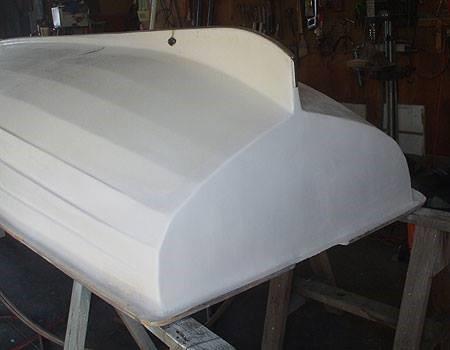 Yet, Janet recognizes that the boat’s repair was more than just physical – it also carried some emotional weight because of all that it represented.

“It surely was a metaphor for getting my life back together.”

So will Janet be taking it out for a relaunch anytime soon?

“My son is off to college and I have bad knees at times, so I laugh about maybe rolling off the dock to get in, but plans for sailing after all these years are in the works. . . Ha, my little skiff has gone along with me still, and a Viking funeral is still far, far away!”

Janet hopes to take her boat out for a sail when the warmer weather comes to Wyoming, perhaps to Lake DeSmet. The Cheyenne consider the lake a sacred place, so rather than see it polluted by jetski noise or sullied by oil leaks, a quiet row or sail seems a more respectful way to appreciate its natural beauty.

It sounds like a fitting location to celebrate life, and rebirth.

As Janet says, “You never know how much a little skiff can mean. If water is life, so are the boats we put to sea . . . wherever that may be.”

This story was written by our long-time editor Katie Malik, who is another boatbuilder’s daughter that grew up around boats . . . in fact she is one of the daughters of our founder, Dave Robertson.  If you have a story about your experiences with one of our boats that you’d like to share, please don’t hesitate to get in touch.  Talking with our fellow small-craft lovers like Janet is one of the best parts of our work.  If we publish your story, we’ll happily send you a gift (like a nice Gig Harbor Boat Works hat) as a thank you.