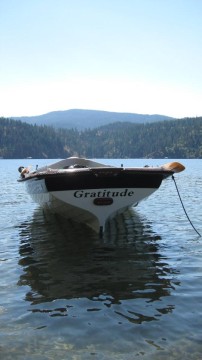 Last week we did a “melonseed roundup” mailbag post, and we’d like to continue along the same lines and present a couple of mailbag items that have come in from Jersey Skiff owners:

A bit of “Gratitude” from Coeur D’Alene:

Recently the owner of a Jersey Skiff in Idaho made a comment on our Facebook page to which I sent a personal reply. Coeur D’Alene is such a beautiful area, there’s always something to do and see – when not rowing his Skiff he likes to go on  morning bicycle rides along the lakeshore.

“Dave, you and Jan would always be welcome, come this way with a bike and join along. Yesterday I went on my first row this year in “Gratitude”, the superbly crafted vessel I love so much. Did not step the mast,only rowed. Three hours of rowing,spent four delightful hours in the sunshine on lake Coeur D’ Alene. All alone, me my Gig Harbor Jersey Skiff and a pair of carbon shaft, spoon blades. When finished I had two new blisters on my right hand to cherish and enjoy. Getting blisters rowing is one of life’s simple pleasures and to be savored. More later, your friend and thankful admirer in CD’A.”

A Jersey Skiff testimonial, of a sort

“By the way, I wanted to mention that I participated in Howard Rice’s academy in Port Townsend last summer. He got to sail the skiff with me and he was very impressed. I don’t think he has sailed in one before. He and John W. both decided it was the fastest boat out there on the days we had it in the water.”

OK, since it’s not directly “from the horse’s mouth” it wouldn’t hold up in a court of law, but we’ll take it!