Today we have another post in our series where we highlight a common (or particularly interesting) question we get from customers.  A gentleman contacted us because he is soon going to be purchasing a yacht that includes a fully-equipped tender:

“I am in the process of acquiring …. a 44 foot Island Packet.  She is sweet, and hoisted on her stern is a 10 foot Navigator (comes with oars and sails to boot).  Currently the Navigator has a 2 ½ horsepower engine.  Is it possible to put an 8 horsepower engine on this dinghy?” 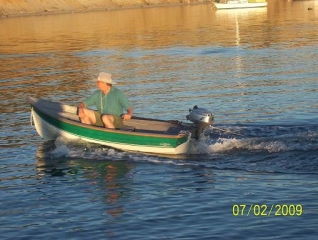 As sometimes happens, this question evolved into a discussion around the science of hull speed (and how much fun it is to go fast!).

Let’s start off by discussing the practical aspects of putting an 8hp motor on a 10′ Navigator.  For those who are yacht-savvy, we can compare putting an 8 hp motor on a Navigator to installing an Allison V16 in an Island Packet.  Or simply put, there is just too much power being put on a hull shape not designed for it.  There are two primary reasons why it doesn’t work as well as you might think:

An 8 hp motor weighs as much or more than a ’10 Navigator! The displacement of the Navigator is only 90 lbs, or 75 lbs in the kevlar version.  Putting a motor that heavy on the back end would upset the balance, pulling the back end down and accordingly increasing drag – actually slowing you down.

A Navigator has a displacement hull that easily attains hull speed using only 1/4 hp.  A 2 hp motor will push it at about 7 knots, which is almost double hull speed. Putting more power and weight on the stern just makes the stern droop with minimal increase in seaworthy, reasonable speed.

Combine those facts with the extra fuel cost of running an 8hp motor vs a 2 hp, and your more powerful motor becomes pretty counterproductive!

Physics aside, there’s an intangible benefit of having a smaller motor on your boat.  I have some powerful vehicles that can go really fast. But I like to go on the water to downshift and appreciate little things. And it’s surprising how fast 7 knots can feel when according to the laws of physics,  you are going  almost twice the displacement hull speed. Akin to  going 18 knots in the Packet. ;<)

Rowing a Navigator can be an eye-opener too. It will easily glide 50-70 feet per oar stroke and flat water and with a bit of effort can row at hull speed. A couple of years ago a Navigator owner competed in a cross sound race against kayaks , canoes and Whitehall style open water rowboats. The race was from the middle of Gig Harbor Bay, across the tide rips of the Tacoma Narrows to Point Defiance and back. The distance was 8.4 miles and he finished in the middle of the pack in just 1 hour 44 minutes!

Simplicity is nice… just lower the dinghy and jump in with a pair of oars. No need to fuss with a motor unless you are planning to go a loooong way.  If the silence of rowing and the speed of motoring seems more your style, there’s always the option of a rudder-mounted electric motor, too!

For further reading: We also talked about hull speed in our Autumn 2009 Newsletter.