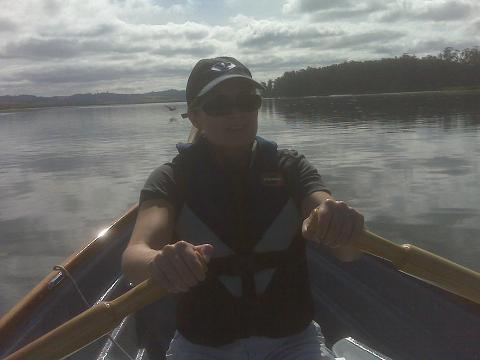 Welcome! Here in the Pacific Northwest, Summer has arrived at long last!

We have a lot of news for you, and hope you enjoy reading this newsletter as much as we enjoyed putting it together.

We received the following email and pics from Brant and Randi, proud owners of a new 14′ Whitehall in Monterey, CA.

“Hi Dave and all,

“I have been enjoying the boat VERY much here in Monterey.

“First excursion was out of the Santa Cruz harbor – the UC Santa Cruz rowing club had a ‘Slug Row’ race scheduled and I went out with them just so I had company out there when I was learning how things worked in the open ocean. I rowed 6 miles out and everything worked like a charm.

“My wife and I have been rowing a couple of times in the Elkhorn Slough (eight mile stretch of calm water between Santa Cruz and Monterey) since she is convinced that until I know what I am doing, she wants to be away from any sharks. Attached is a photo of her rowing in the slough, and another holding the boat at the Moss Landing Harbor.

“The third photo is a self taken shot of me rowing out in the Monterey Bay – I attached a mirror to the stern but need to figure out a more elegant connection (maybe a bolt and wing nut if I can find a brass one) – but it works great. 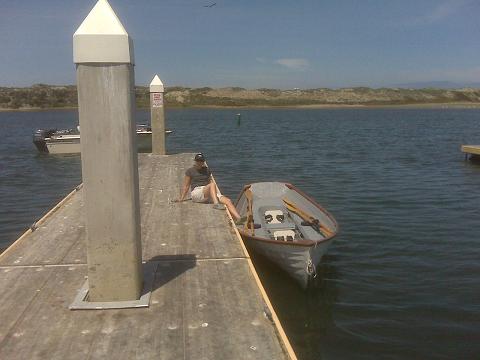 “I have been rowing in the AM before heading into work a couple of times a week. The sea is typically flat early in the AM and I get visited by interested sea lions, seals and sea otters! I leave to work and hour and a half early and can row out around the mile buoy and back to shore in time to put the boat away and change into work clothes. Great exercise and a great way to start the day! I have also been out when the wind is up and the waves are 4’+ – the boat performs very well in a bigger swell and as my comfort level grows I will venture out further.

“The hardest part about rowing this boat for exercise is that everyone wants to stop you and ask questions – lots of admiration for your craftsmanship.” 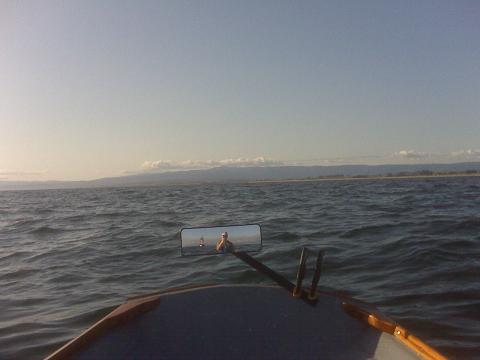 We received the following email from Andrew Nelson, who sailed his Whitehall (and had FUN!) in conditions most of us would rather avoid!

“Went sailing off Santa Barbara in the Channel on Saturday. Left the harbor in a gusty 10 to 15+ kt wind. As you know, she’s tender and the gusty winds were a challenge (shipped a few quarts, but bailed out easily enough). The wind settled down to about 10 kt or so farther offshore and the steadier winds were a pleasure. Tacked toward the offshore platforms (more than 3 miles offshore) passing several much larger sailboats on the way (37 foot Ericson, Fisher cruiser, cruising catamaran) running at hull speed all the time. When haze obscured the shoreline , I turned back from a bit over 3 miles off (based on how close I was to the platforms). The close reach to the harbor took less than 40 minutes and the last 1/2 mile or so was much more exciting than the beat out.

“Winds now 15 to 20 kts. Had to spill both the main and the jib to stay upright, but she didn’t slow down. The mast was flexing wildly whenever the sails flapped, but everything held together. It was too windy in the harbor to tack against the wind in the narrow channel (she needs care in this situation even with milder winds, mostly because of the lack of visibility through the sails), so the jib and main came down and we rowed the last 100 yards or so.

“Sailing an open boat for hours on end at hull speed is more fun by far than anything with a motor (or a trapeze). This boat and her skipper became one integrated and supremely satisfying unit. She balances well in all conditions and picks up her skirts in anything over 8 kts. She slices the water so cleanly, the wake fades in a few boat lengths. And aside from a few dollops of water over the lee rail when my attention lapsed, she’s quite dry. I did get wet, but only a bit. Since I could easily have been dunked, that was no problem.

“Quite a vessel you make. I doubt you’ve engineered it for quite this type of abuse, but she passed this unplanned trial with flying colors.My complements!

From a Happy Skiff Owner:

This email came from a happy new customer in Oregon:

I’ve been enjoying the skiff *tremendously* over the last few weeks. We’ve had great weather and although the yahoos are out in force on the Willamette River on weekend afternoons, it’s been wonderful sailing and rowing after work on weekdays and early mornings on the weekends. I’ve been out a few times per week for the last month or so, and it’s really given me a deeper appreciation of the skiff – it’s a great boat. I’ve gotten many admiring comments and questions about where it was built (I’m sending them all your way!).

A Day On The Lake

One of the great things about building boats is, of course, using them!

Dave and Janet took their grandkids for their first fishing expedition in May. The went to one of their favorite little lakes in Eastern Washington, and of course took a nice boat. After all, life is too short to have an ugly boat, right? Dave and Janet took the family 12′ Point Defiance, a great choice for an easy day on the lake. Lots of freeboard, plenty of room for two adults and two little ones, and easy enough for the grandkids to row! Taking the kids was a bit of a challenge… the fishing was great, even though the catching wasn’t! 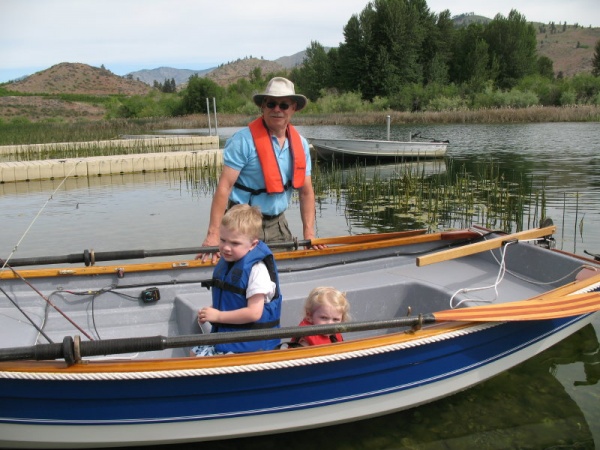 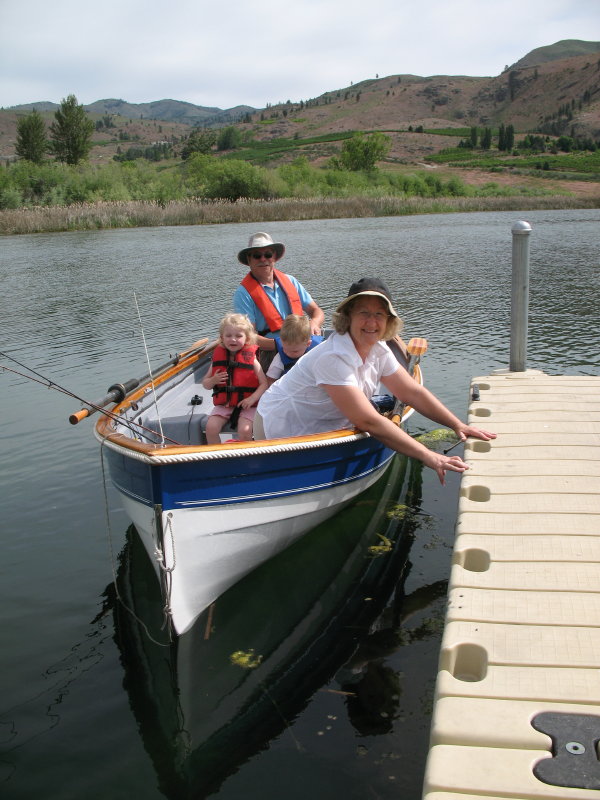 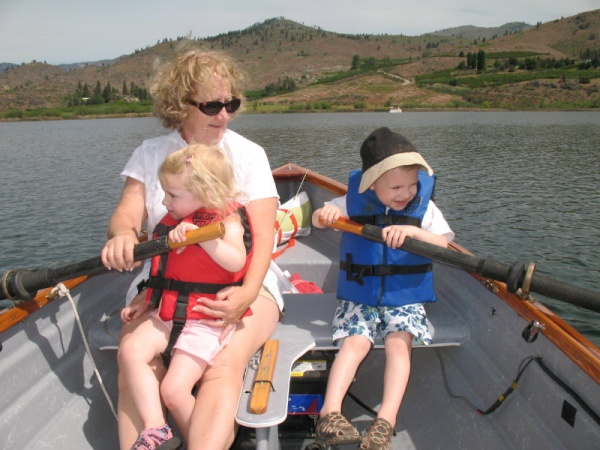 Happy words from a tugboat skipper:

Attached are a couple photos of “IDA”, 12′ Pt Defiance. When I picked it up just after Christmas I was sure I had a winner. When I took her out for her first row, I knew she was a winner. What a sweetheart of a boat to row. I’ve had her out in a bit of weather and she has handled nicely, never felt uncomfortable. The photos were taken in Bellingham Bay from a tug anchored in the bay. There anemometer showed 15 to 20 and I was having no problem at all.

My First Mate in the photo, Axel loves hopping in that boat now more than he does going for a ride in the truck. Now that’s saying something! Thanks for building a great boat.

I have been a tug boat Captain for over 25 years and have worked at sea my entire life. Of all the boats I’ve been on, big or small, they all have had there own personalities. IDA cerntainly has a wonderful personality. And the name IDA. That was my Grandma who taught me how to row way back when in Poulsbo. She had a wonderful personality too.

Recently a customer came to us looking for a tender for his classic Chris Craft yacht. He wanted the light weight and maintenaince free attributes of a fiberglass hull, but with a very traditional appearance to compliment the yacht.

So, we built a very pretty 9.5′ Captian’s Gig with varnished mahogany gunwale trim, and custom-designed and -installed teak interior detailing. He’s delighted with the result of his ‘showpiece’, which turned out to be a one-of-a-kind dinghy. Here are some pics of the dinghy under construction: 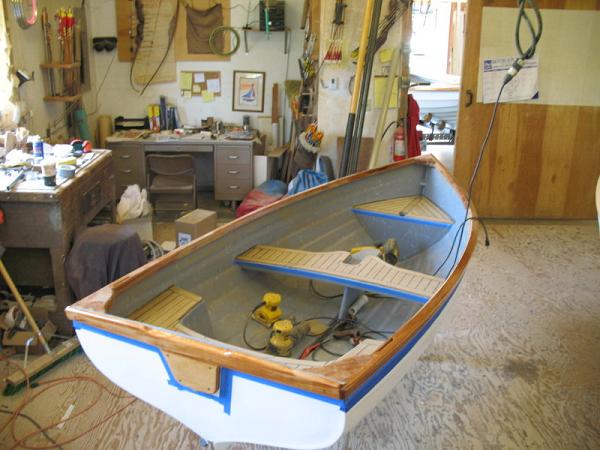 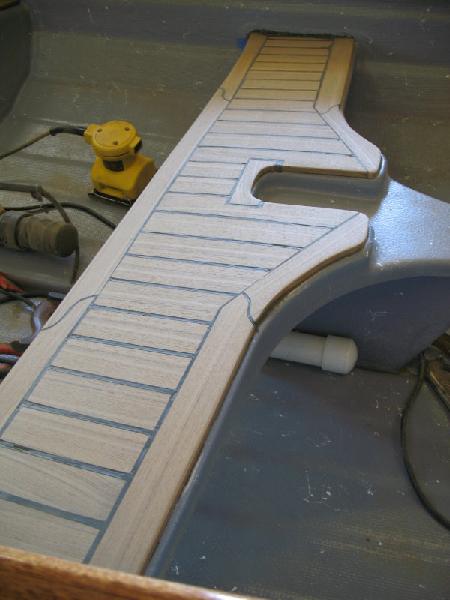 Roz is on the second phase of her Pacific row, well past Hawaii. In a blog post from last month, she included the following picture of our sliding rowing seat: 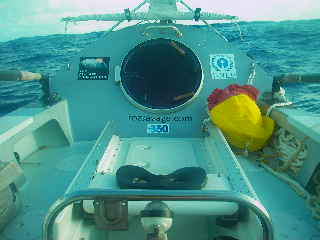 For those of you who don’t know, Roz Savage is a British ocean rower, author, motivational speaker and environmental campaigner. After 11 years as a management consultant, she embarked on a new life of adventure by rowing 3,000 miles across the Atlantic. Roz is now attempting to become the first woman to row solo across the Pacific.

Make sure you follow Roz’s blog as she rows across the Pacific Ocean!

This next email — the and accompanying astounding photos — are from a customer who along with his wife uses a Jersey Beach Skiff for photographing whales in Hawaii.

It was a good season whale watching, I guess we are about done though, we saw two whales today but it is really late in the year to see any at all. The skiff again received many favorable or should I say enviable comments regarding her usefulness as a platform for our whale photography hobby. If you had a shop here I am sure you would be selling these boats like hotcakes. I have had several offers for our boat which has absolutely no chance of being sold. We use it four to six days a week dependent on the weather. I often wish I had ordered the sailing configuration but my wife would probably shoot me the first time we sailed off to Molikini, as you know the wind is an issue here and you really need to be cautious and pay close attention to the changing conditions, which can go from flat calm to blown out in about two minutes.

Anyway here a few shots from the end of the season, the whales seem to breach more often just before they head back to Alaska. Ellen caught this with our Canon 40D and 400 mm image stabilized lens. Those lenses are amazing in reducing the effects of a rocking boat. We are about three hundred feet from this whale. 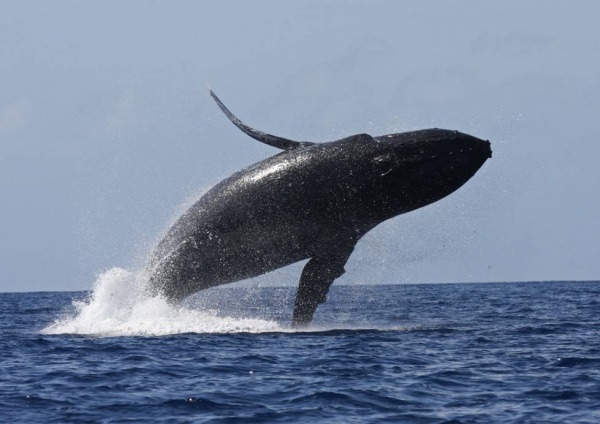 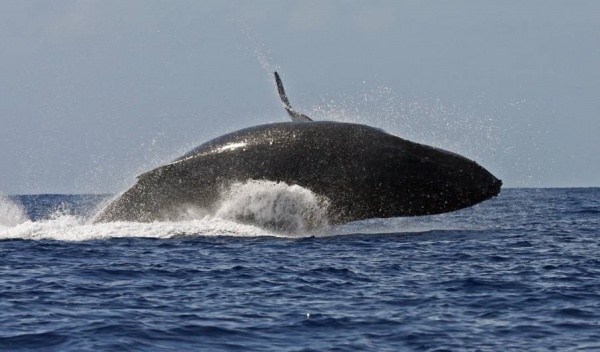 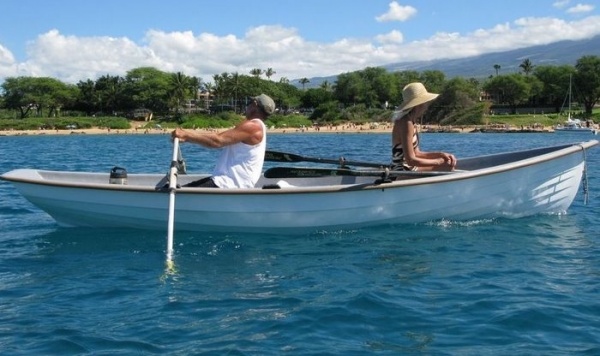 So that’s all the news for now. We hope to hear from you soon. We’ll be busy working on our next newsletter as well as your boats. So if email is slow, please call.