Welcome! This is our second web newsletter. Due to overwhelming response to the last newsletter, we’ll be keeping this going. We’ll also archive old newsletters so if you miss one, it will be no problem to catch up. We have lots of things to share this month. We have also found that we won’t be able to do a monthly newsletter as our business is booming and well we’d rather take a break on the water than in front of our computer. Still, this has been fun and if you keep sending us stories and photos, we’ll keep putting them up when we have the time.

First the bad news: our suppliers have been raising their prices to the point we can no longer sustain our prices. So with great reluctance we have raised our prices 7% on the base boats. You can read our full explanation here. Letter to our Valued Customers.

Many of you know that come September we start to feel our oats, having worked all summer in the shop. This fall we decided to take our newest boat out for a race to test it against what other boats can do. In previous years we’ve used a 14′ Whitehall as it’s very fast with dual rowers. The Heritage Row is a rowing regatta/race sponsored by us and the Gig Harbor Historical museum to commemorate the days when citizens of Gig harbor had to row across the Tacoma Narrows to Tacoma for supplies. Our prototypes and prior test rows in the 17′ Melonseed told us that the boat was fast, but without some competition we could not tell just how fast. Well, how does first open-water rowboat to finish sound? We completed 8.4 miles across open water, replete with tide rips and cross wind, in 1 hour 22 minutes, finishing just after the pure rowing shells. We were neck-and-neck with an Alden Ocean Shell for the entire race until he managed to avoid embarrassment by beating us in the sprint to the finish.

Occasionally we get an inquiry from a customer who wants a seaworthy sliding seat rowboat and prefers a drop-in type rigger system. So in response recently we built a prototype Whitehall with a Piantedosi Row Wing sliding seat with outrigger. It works quite well as you can see. Falk is using a pair of Macon Blade spoon oars with D shaped Piantedosi feathering oarlocks. This particular one is listed for sale on our Available Now! listings. It’s just another example of our ability to build a custom boat for you. 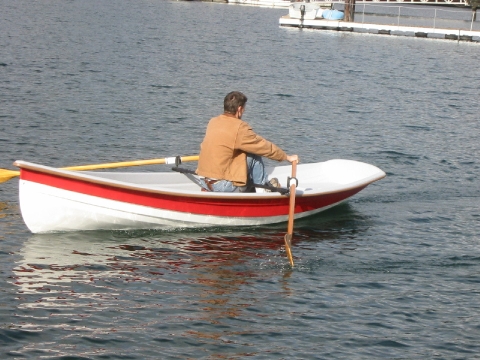 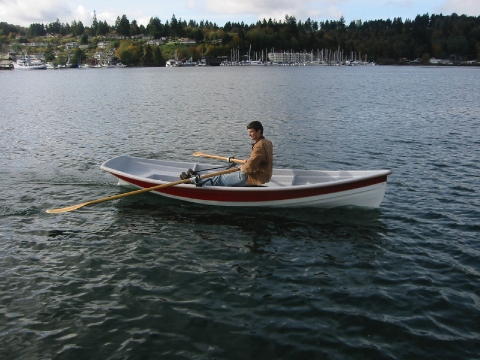 Now for some better news from our customers:

I thought you might like these pictures of my Maine lobster boat. We had a block party and people were making games for the children on their front yards. (We had croquet set up on the grass.) I got four friends and lifted the boat off the trailer onto the driveway–it sits nicely on its steel skids and is very stable with a board under the stern. 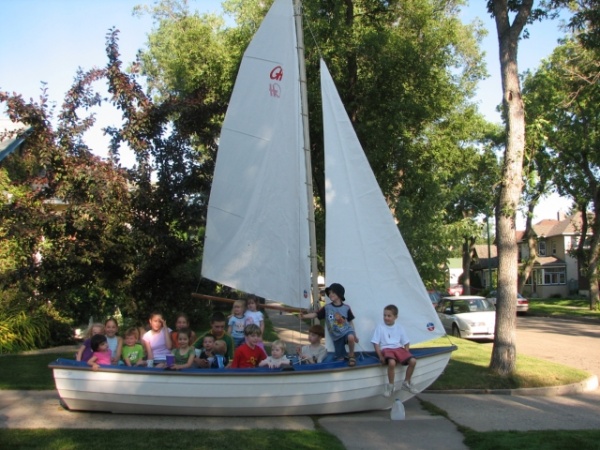 The boat attracted children the way a magnet attracts nails. The little guy with the hat was a captain type–he had seen a pirate movie and named the others in the boat after the characters in the movie. The little red haired guy was tying knots in every line he could find–when I asked him what he has doing he said he was “fixing the boat”. We piled all sixteen kids into the boat for this photo. I forgot that I also wanted to get a picture of myself sailing down the driveway! 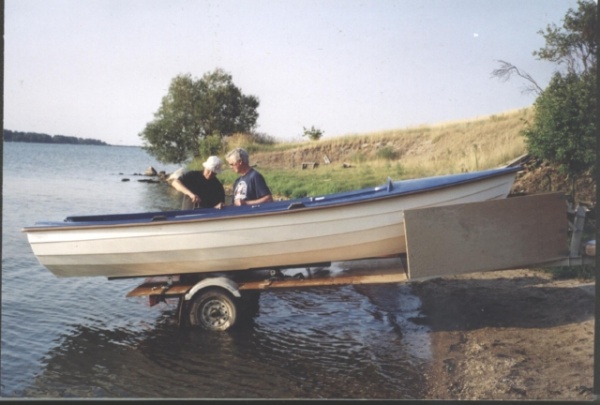 I attached a lot of 5/8 inch plywood to the trailer to protect the boat from flying stones. This works very well and is essential, since most roads in the North of the province are not paved. We do not have a concrete boat launch at the local sailing club, but I just back up as far as I can, without getting the Explorer on the beach sand. Then it is easy to slide the boat off and to recover it with the winch (provided the bunks are wet on the trailer).

I’m sorry I have never sent you any e-mail before about how much I love this boat. I sail often and also go fishing in many different lakes in Saskatchewan. Yours, H. Goldie

Dear Dave, When I bought my boat about three years ago you guys asked me to send some pictures. 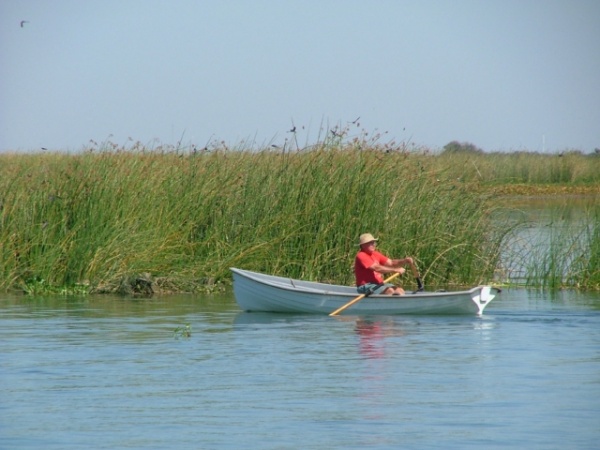 I use the boat in the Sacramento San Joaquin Delta off Bethel Island. I use it for exercise and excursions. We get fast currents and white caps through our sloughs and the 14′ Whitehall is perfect for this area. 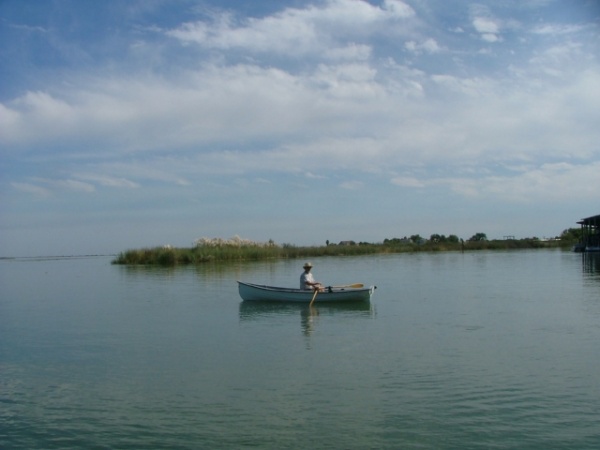 I am in the red shirt and the other person is from your area. He is Steve Van Slyke. He was the manager at the Gig Harbor Marine store. When I was looking at row boats I asked Steve about you guys as I did not know anything about you. Steve gave you a good reference and I am very happy with my boat. I met Steve and his wife while we were both cruising in the South Pacific on our own sail boats in 1992

Let me know if you want the rest of the pictures. J. Kimble Bethel Island, CA

Hi Dave, This labor day I entered myself and my dory in the Shipyard Raid. That’s a rowing and sailing race from Gabrolia Island BC. to Port Townsend WA USA. The race was about 100 miles long and over 7 days, with stops for lunch and camping every night.

I finished fourth of the nine boats entered. The Swampscott Dory performed really well both sailing in winds from 3 knts up to 25 knots and rowing in the dead calm. There were two days in which I rowed about 20 nautical miles. I got beat mostly by not rowing enough of the shorter legs. I do so much prefer to sail if there is any wind. However with the sliding seat, I was the third fastest at rowing, being beat by a 23′ dual rowing shell and a 17 ft Whitehall crewed by two people. The Whitehall was just the tinest bit faster with that longer waterline and two people rowing, and over the miles that difference ate away at my ablity to keep up. Sailing however I had the Whitehall beat hands down. Winning a RAID is a lot a matter of luck in which kind of wind you get as well as skill with boat handling. The Swampscott Dory was a good all round boat. I just need to bring crew next time. 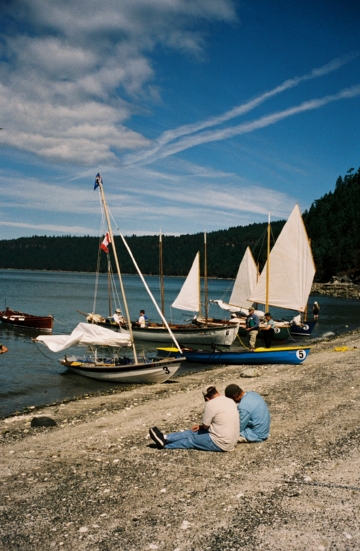 This photo is from the first day. We are eating lunch on the beach at Blackberry Point. 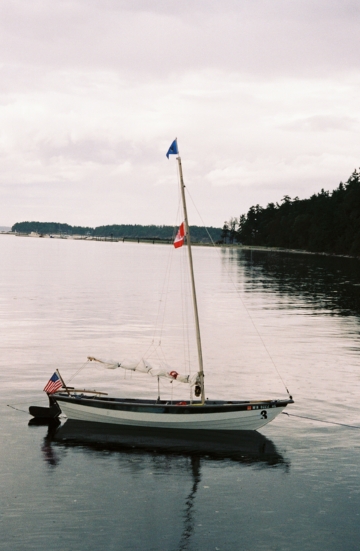 This photo is from the third day. My dory is at anchor off Sidney spit after the days racing was over. I used an elastic in the anchor line to keep the boat off the shore. And a bow line to a log to keep her within reach. 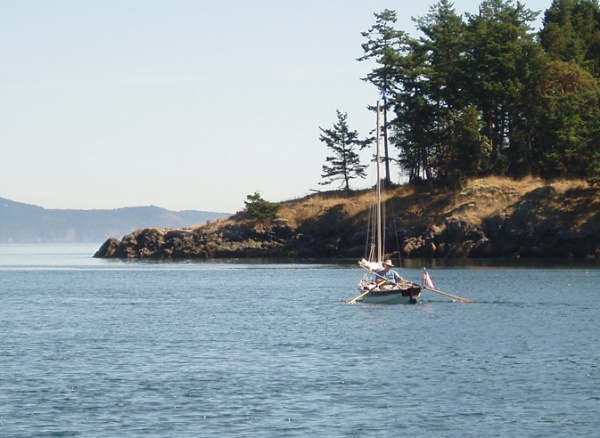 This photo was taken by Tad Roberts who ran the Shipyard RAID. I’m going through Lopez Pass with no wind and about a 1.5 knot current against me. 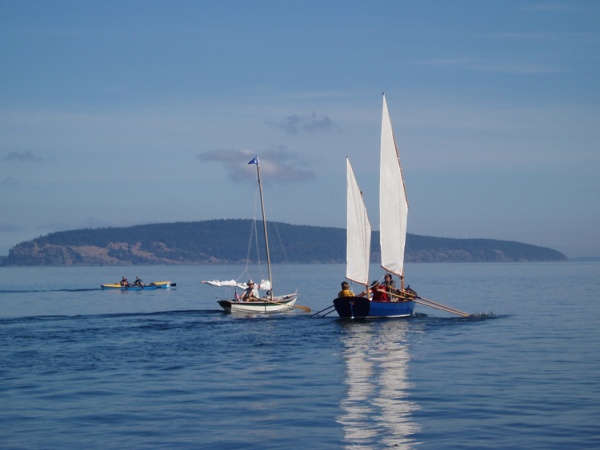 This photo was also taken by Tad Roberts. The other boat is “Ratty”, Tad’s designed boat. This is leaving Roche Harbor and heading for Jones Island. Ratty was designed and is owned by Tad, and won the overall trophy for the seven days of racing. Tad Roberts, Yacht Design & Naval Architecture. However as you can see, I’m going to beat them on this leg, as rowing, I’m faster than they are. 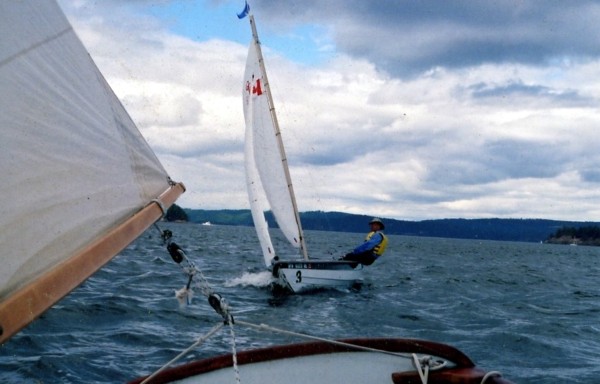 I think with crew I could have beaten them on the sailing legs as well. As you can see from this photo taken by the crew of Ratty, I’m under balasted. But you race with those you bring. However the three guys on this boat were a lot of fun to race against. Gary Powell, Renton WA.

Just a note, Gary has been sailing and racing small boats for over 35 years so qualifies as an experienced sailor. He bought one of our earlier sailing dories and has extensively modified it for sailing, rowing and fishing. You can see more photos of his boat at Swampscott Dory. You can also see more photos from the race at Shipyard RAID.

So that’s all the news for now. We hope to see you at the Seattle Boat Show in January. We wish you a happy and safe holiday with your loved ones. And look for our up and coming newsletters!