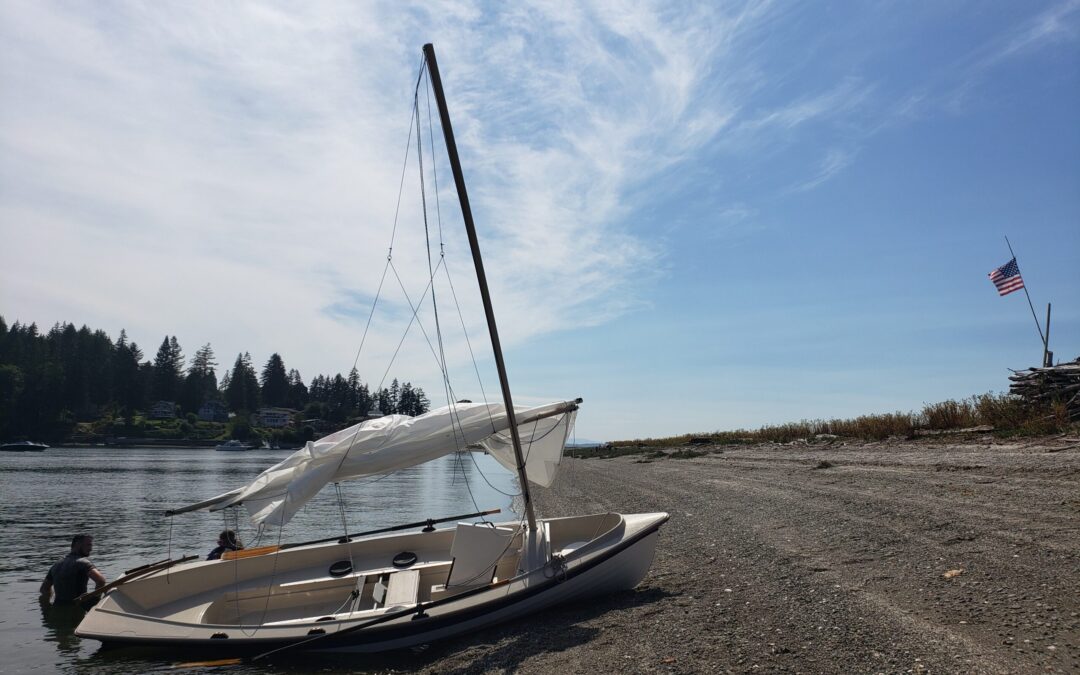 At long last, the new 17′ Salish Voyager is complete!

After over a year of design and build, the brand new 17′ Salish Voyager has arrived. Falk took the completed prototype out for its first sail last weekend and put it through its paces. We are thrilled with how this boat turned out, and we’re turning the helm over to Falk for the rest of this post so you can hear about it in his own words.

It’s been a crazy busy summer! It seems that with stay-home orders and all the social distancing being enacted these days, people are turning to boats. Every boat comes with its own moat, after all! We’ve been inundated with phone calls, emails and walk-ins, while working to complete orders and, of course, finishing up the Salish Voyager. Well, the moment is finally at hand, and at long last I had the opportunity to get the Voyager on the water for its first full sea trial. Results were exhilarating. The Voyager performed flawlessly. Conditions were perfect, with warm water, little wave action and winds variable from flat calm to fifteen-plus knots. The boat moved easily and lightly, and I could finally put it through its paces.

As we already know from the early trials, the boat is very well balanced, with just a slight weather helm at all points of sail. Even while screaming along with the rail under I was still able to control the tiller with a two-finger grip. Given the long waterline and prominent skeg it should come as no surprise that this boat won’t turn on a dime; rather, it moves deliberately into turns. Nevertheless I never had any problems tacking, as it had plenty of momentum to carry it through. The Voyager hull is soft-chined, with a relatively narrow waterline. This means it heels easily; it is almost impossible to sail flat in any but the lightest conditions, but it loves to sit at 15 – 20 degrees of heel and is solid as a rock once it gets there. (The narrow waterline is one reason the boat rows so well!) Of course my instinct was to ease the sheets as the boat started to heel, but the trick is to relax into it; hop up on the gunwale and let the boat accelerate. It will fly down the bay at a jaunty angle, and feels perfectly comfortable doing so.

Going downwind is deceptive; the hull is so easily driven that there is no indication of how fast you’re moving. The sand spit at the end of the bay came up with surprising speed.

Once I’d had my fun – and the wind decided it needed a break – it was time to get to work. This is supposed to be a “serious” boat – let’s see what happens when things go wrong. We don’t have pictures of the capsize test (didn’t have a cameraperson), so here’s my story of how that went.

My first attempts to upend the boat were entirely unsuccessful. Jumping on the gunwale did nothing more than get the floor slightly wet. Hiking out to leeward had no better result. I ended up having to grab the mast and dragging it down as I jumped overboard. The skiff sat high and stable on its side; with the mast and yard acting as flotation to keep it from turning turtle. Leaning on the mast had absolutely no effect; it was solid. The boat floated on its side, with the cockpit floor several inches above the water. I made my way to the daggerboard, leaned on it briefly, and the boat popped right back up. No problem. Getting back in was also no problem, less trouble than getting out of a pool. There was an inch of water on the floor, which immediately started to drain through the bilge. By the time I had my gear sorted, the cockpit sole was dry again.

Good enough, that was successful – but what would happen if I had the hatches open? I popped one and went over again. Good thing the water was warm! This time there was much burbling as the side storage compartment filled with water – I’d estimate almost 200 lbs worth. The boat sat noticeably lower in the water, but the cockpit sole was still above the waterline. Righting it took only slightly more effort this time; I ended up bracing my foot against the lower gunwale as I leaned on the daggerboard. The boat came up with no problem, and sat at a jaunty angle. I had to circle back to the low side to climb in; but though the boat was sitting with the gunwale almost at the water it was still stable and predictable. I climbed in, found the bilge pump, and five minutes later we were on our way.

Now about that ballast…

A lot of debate has gone into the addition of the ballast tank under the floor. Previous experience with the Melonseed and Jersey Skiff had convinced me that a hundred pounds or so of ballast would be a very good thing. I spent the first half of my day with the tank filled; then I did it all again with the tank empty. There was a difference, though it was much less pronounced than I had expected. The boat felt slightly more settled with the additional weight, but there was much less of a difference than I had expected. The other purpose for the ballast was to aid in capsize recovery, but again it seemed to make not a whit of difference. In fact, when I did the “hatch open” capsize test with no ballast, the boat popped up before I could even start leaning! Could have been the wind, but that was the opposite effect from what I had expected. We’ll have to play with it some more, but I suspect that we may forego the ballast tank in favor of a larger storage bay under the floor at some point down the road. I suspect the heavier  base weight of the Voyager puts it at the “sweet spot” that would require ballast in the Melonseed and Jersey Skiff to achieve.

The trip back to the boat launch was exciting as I encountered some of the strongest gusts of the afternoon; there was not a hint of complaint from the boat and the ride was exhilarating. I threw in a reef just to prove that I could and promptly shook it out again; easy-peasy, and boring. I’m not a thrill-seeker by nature; the boat is just that good. Stay tuned for further updates as we finish up trials and finally get the Salish Voyager into production!

P.S. A lot of you have been asking for the weight of the Salish Voyager, which we couldn’t provide until we had a finished prototype. I can now tell you the prototype weighs in at 440 lbs, but that will come down somewhat in the production version now that we know how it all fits together, and can use some more finesse with its construction. You can see the full specs now listed on our Salish Voyager page. More photos and videos to come.