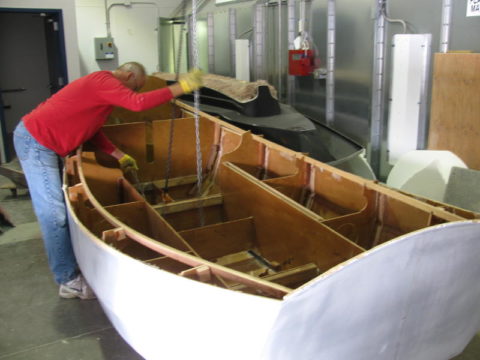 The first glass Scamp hull is now in the mold. We did some experimenting with scantlings to try to get this hull close to the desired weight of about 200 pounds (hull only). The finished weight for a sailaway Scamp is just over 400 pounds so by the time we add the deck, centerboard, interior , bulkheads, rig etc the weight should be close. When the prototype Scamp is finished and weight established we will make final adjustments as necessary.

This installment of pictures shows an interesting facet of construction. These first two are of the hull plug you have seen in all the prior updates: 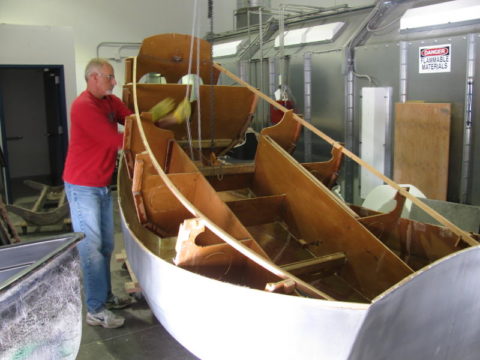 We are done with the plug now but need the interior grid of stringers and bulkheads to form the basis of the glass deck and interior. ensure integrity between the plug and actual hull we removed the grid from the plug and after trimming for new tolerances installed it in the prototype glass hull. Easier said than done!  The fresh new actual glass hull will remain in the mold during the entire process of crafting the deck and interior plugs and molds to ensure nothing changes…. In the top photo below, the prototype glass hull can be seen in the mold at the left side of the picture: 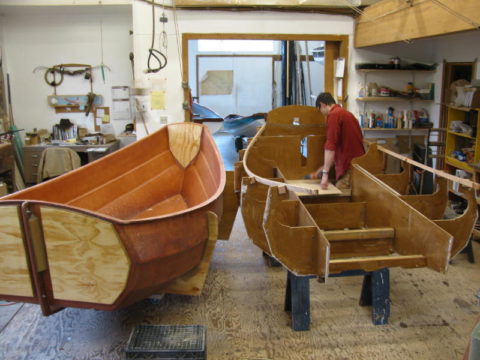 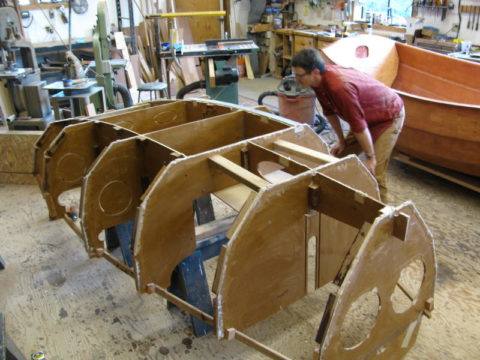 Now we begin all over again, building the plug for the deck; the deck needs to be designed and built before the interior because we’ll need specific, precise dimensions between the hull and deck to determine the placement and fitment of bulkheads and seating. There is a lot of head scratching in this part of the development – the deck and cabin as drawn by Welsford would be completely impossible to remove from a mold due to the numerous angle changes and eyebrows. So, there will be subtle changes incorporated in the deck to be true to the character of Scamp yet make it feasible got fiberglass molding. For example, the coaming will be the same height but wider at the top and flaring down to the deck. This will incidentally have the added benefit of being able to design the oarlock sockets integral with the coaming instead of being an afterthought bolted to the coaming side. The cabin sides will retain the porthole windows … the cabin front will lose the wood versions’ little cosmetic ‘wings’ and have a slightly rounded contour instead of being flat. You can get the flavor of what we are doing in the final group of pictures: 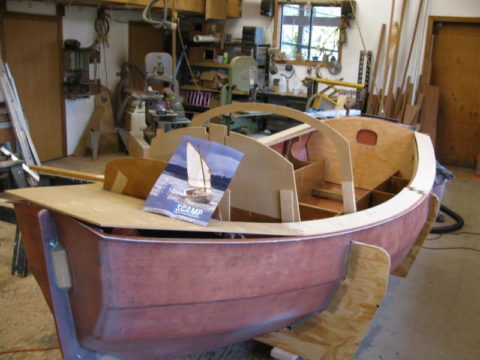 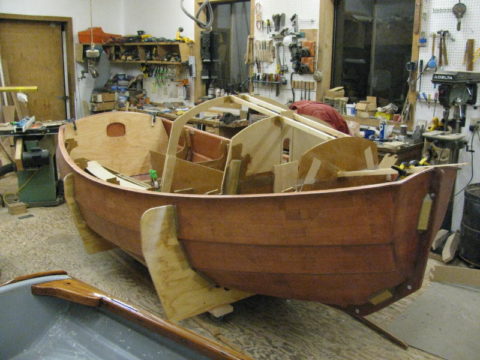 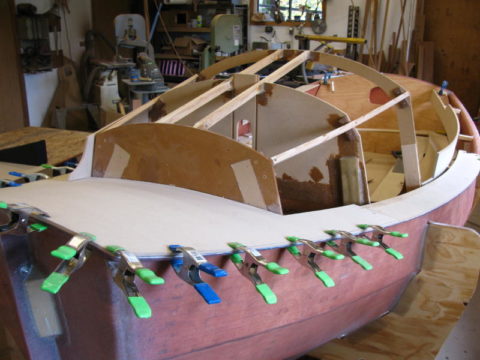 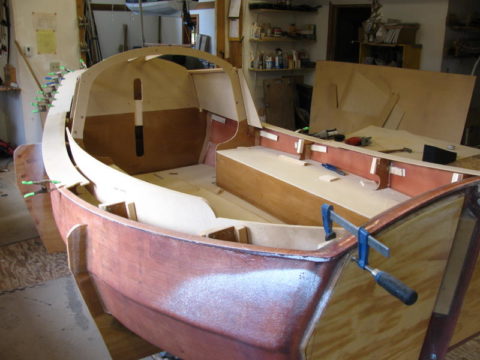 We anticipate about 2 weeks to create the structure for the deck, then starts the time consuming process of fairing and priming the deck plug. If all goes well the deck plug should be ready to go back to the glass shop to build the deck mold mid – December.

Although we have been careful not to promise delivery dates, we had hoped that perhaps Hull #1 would be ready for Havasu in February 2013. There isn’t much doubt the hull and deck will be ready by early February but the reality is that the interior ( the most complex part) will still be in the tooling stages then. We also have a commitment to show Scamp at its formal introduction to the larger boating world in the Seattle Boat show which runs the last week of January and first week of February 2013. Thank you all for your patience. My hope is that by writing these updates you can view and understand the complexities of building a great boat with precision. Good things don’t come easy…

Regards,
Dave and crew at GHBW