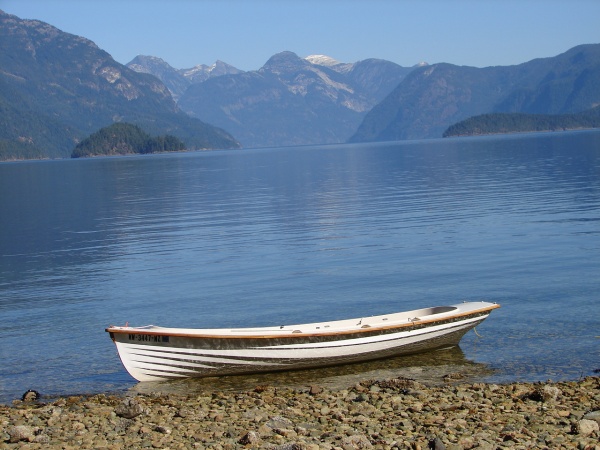 It’s been a while since we’ve done a mailbag roundup.  Here we have some owner stories, including an owner testimonial that I think gives a great and thorough analysis of the 17′ Jersey Skiff sailboat.

We were allowed to eavesdrop on a conversation between a current Gig Harbor Jersey Skiff owner and another fellow interested in becoming a Jersey Skiff owner. The prospective owner, John, asked Lane, the owner a number of pertinent questions that Lane answered in depth… plus a few other interesting and pertinent points. Excellent perspective from an actual Jersey Skiff sailor:

I’ve spent weeks – months – of quality time in the inland waters between Pensacola and Mobile Bay. With a Jersey Skiff in that area, I’d never go outside. Why would I? There’s nothing out there to see. But inside . . . wow. It doesn’t get much better. Pine trees, white calcareous sand beaches, virtually no tide . . . you can beach a Skiff inside the barrier islands anywhere in that region. And then you can start thinking about areas east of there. I would LOVE to take that skiff to Cedar Key, FL. Or the Everglades in winter . . .

The most accurate way to think about a Jersey Skiff is, it’s an enlarged, wider version of a Whitehall rowing skiff with a sail rig – which is exactly what I was looking for. It’s not a Flying Scot; it’s nearly the opposite. It’s a very different KIND of boat. The boat is so easily driven, you don’t need much sail, and the Jersey Skiff rig has all you’ll ever need, plus a reef and a roll-up jib that takes about 2 seconds to furl. I’ve literally sailed that boat upwind at one knot of boatspeed in one knot of true wind . . . with about four inches of centerboard protruding below the hull. You’ve owned a Sea Pearl 21; this is like that only lighter and easier to launch and retrieve. (Sea Pearl 21s have internal ballast, as I recall.)This was on Lake Pend d’Oreille in northern Idaho.

I’ve also planed it at 10-12 knots on Pacific Ocean swells in 20 knots of wind — singlehanded. I don’t recommend this for the faint of heart, but in experienced hands it works just fine – better than you’d think!. Body placement is important – you have to move as the wind requires – but with 360 lbs of combined crew weight you will never have a problem. I’m 6’6” and weigh 290, and I’ve never met a wind I couldn’t handle. With two it’s easier; one person can stay put while the other does the adjusting. Generally I let the “crew” steer from the weather side while I handle both sails and move back and forth athwartships on the (pegged) sliding seat – facing forward. All three sheets, the furling line, the CB pennant, the main halyard, topping lift, and the reefing line are quite close at hand in this configuration. I had the boat made with an extra-heavy boom for use with a vang, but have never installed one because it just isn’t needed.

Ease of launching: You don’t ever have to get the trailer wheels wet. I mean that. Tires yes, but not wheels. I launch it by hand by rolling it off the trailer, taking care not to let the rudder touch bottom. Retrieving is just as easy: I unroll the winch strap and hook so it just reaches the wood crossbeam on the trailer, I lift the boat’s bow onto the trailer, clip the hook on, then let it sit there while I walk to the winch, whereupon I just crank the boat onto the trailer. If you’re agile, you can do this with dry shoes. I’ve never gotten my feet wet yet.

This boat, by the way, has the stainless steel rub strips on the bottom that Dave offers for beaching and other rough use. On Pend d’Oreille Lake I pulled the boat out onto driftwood logs when not in use. The beaches there are gravel, to be avoided. I have photos if you are interested.

In my view, this is not a particularly wet boat. The bow shape and the lapstrake construction help. But if you’re going to spend a lot of time going upwind in 15+ knots of wind in choppy open bays, you’ll get some spray. I’m imagining Pensacola Bay or Mobile Bay, or Apalachicola Bay. These are big places, and they get choppy. The upside is, if you’re doing it in the summer, you’ll be glad for the spray! Just dress for it. I prefer to stay in quieter places where the extremely shallow draft of the boat is really at home. It will sail upwind in 18” of water; I’ve done it. It will row in less than 12”. Your oar tips will hit bottom before the boat does.

As for a motor . . . I would advise against it. There isn’t a good place to mount it . . . the transom is strongly raked and the stern sections are very fine. The nine foot spoon oars (two sets, and one sliding seat) are an absolute joy and weigh almost nothing. I’ve included a set of standard-type eight footers solely for pushing off beaches, docks, and piers, and rowing in very close quarters, like Monterey Harbor or Santa Barbara, CA.

As for looks . . . it doesn’t get much better than this. You’ll get comments everywhere you go, on the water and off. I tow mine behind a classic car (1965 Checker station wagon), which helps even more.

By the way, towing is absolutely zero problem. The trailer tongue is long and the center of gravity is extremely low. I’ve never encountered a curve, at any speed, where I had the slightest doubts about it.

BTW, just a comment on the performance of that design – don’t know if you’ve heard this before: the Jersey Skiff goes MUCH faster with the centerboard up. The difference is unbelievable, more than in any CB boat I’ve owned (and I’ve owned CB boats from 8’ to 40’). I have rarely sailed upwind in that boat with the board more than about 1/3 down, i.e. with the aft lower corner of the board still inside the CB trunk. In heavy air (18-20) upwind I drop it to maybe 1/2. The only condition under which I drop it fully is off the wind in heavy air and big seas in the open ocean – survival conditions for that boat – when it is surfing at 10+ knots . . . and even then, it’s faster with the board down, just twitch as hell.

And the flat bottom area, small as it is, turns the boat into a surfboard with enough wind. And under these conditions the rudder, which I would not have expected much performance out of at those speeds, works just fine. Really surprising.

While we’re talking about the Jersey Skiff, here’s another letter we received from an owner about his experiences. Gorgeous photo, too!

I’ve been rowing and sailing my skiff for about 7 years now. Wherever I take it I’m always getting complements on the design. The first few years I rowed and sailed it on mountain lakes in Northeast Tennessee and more recently in South Puget sound. This is my first sailboat and it’s been a real learning experience dealing with contrary winds and the tides in the sound. Rowing with the sliding seat and 9′ spoon oars I usually make 3 to 4 miles an hour depending on conditions. Last month I rowed the boat on a self support, 12-day trip in the Discovery Island between North Vancouver Island and BC mainland. Loaded with over 200 pound of equipment plus me (add 180 pounds) I still made good time and was able to keep pace with my sea kayaking friend. It was a real luxury being able to take along bulkier items like folding chairs and heavier food and drink choices. Also, while on the water, it was nice to have the bigger boat to move around in as opposed to being cramped into the cockpit of a kayak. Beaching the boat to unload worked out ok but leaving it on the beach overnight was not practical unless I only wanted to launched at high tide. Anchoring worked well using a small folding anchor tied to the bow and a stern line tied to shore. I used my friend’s kayak to get back to shore after tightening the anchor line. Overall the boat worked out great for this type wilderness trip.

We received this note from Michel from Portland Oregon. He has a very pretty and well equipped  17′ Gig Harbor Jersey Skiff. The passage across the West Passage from Vashon Island to Gig Harbor can be quite boisterous, especially in North wind conditions. This shows the capability of a well sailed Jersey Skiff, even with 4 adults aboard.

I was up your way last weekend, visiting in-laws who live on the south end
of Vashon Island. Last Saturday evening, my wife Amy and I took them over
to Gig Harbor in the skiff to have dinner. What a great sail! The wind from
the north was brisk for the passage in both directions (we actually reefed
down going over), and the electric drive really proved its worth navigating
a fairly busy harbor over on your side. We tied up at the Tides Tavern dock
and I got about a dozen “Wow – what a gorgeous boat!” comments within the
first few minutes. I think I’m going to get some cards printed up with your
web site URL on them – it takes too long to keep writing it down for
people! I expect to take the skiff up to Vashon again in a month or so and
I’ll try to get some pictures this time.

This report is from back in August, continuing the saga of Andrew’s learning curve as he ‘pushed the envelope’ in his Point Defiance sailboat…

Sorry to keep battering you with my enthusiasm, but I can now verify that a PD can plane! Not the 2X or 3X hull speed of a racing dinghy or Volvo competitor, but a decent increment above hull speed. I was out today in nearly the same conditions as I described below except that the waves were more organized and behaving themselves. The wind was steadier (16-17+ Kts?). The plane is rather like a lobster boat, just a smidge above hull speed such that there’s a little rooster tail and curling stern wave just aft of the rudder. It can’t be sustained for long when she has to climb a wave, but when the water is reasonably flat, we were planing along for maybe 10-15 seconds at a stretch. I could have used hiking straps! I was on the rail with my heels in the keel grove and it did cross my mind that a rogue wave could put me in the drink! And not a drop over the lee rail, only splash over the windward side. Amazing!

I had not appreciated the virtues of a wider stern before. I cursed my Ensenada 20 for having a mean weather helm when healed very far. But the PD gently lifts the rudder from the water and reduces it’s bite just enough to round things up and ease the pressure at the right moment. I’m still learning the ropes and it will be many more sails before I’ve explored the full range of the PDs virtues (and weaknesses, if there are any). Suffice to say, I am extremely pleased and glad I made the switch to a more forgiving hull.

And finally, when we go out in one of our boats, we frequently are asked if we would mind if folks take our picture in the ‘pretty boat’. We also get numerous reports from customers that they get the same kind of reports. Here’s one sent in by our friend Nat from Lake Chelan. He said “the guy took lots of pictures with some sophisticated gear” Thanks Nat and the unknown photographer! 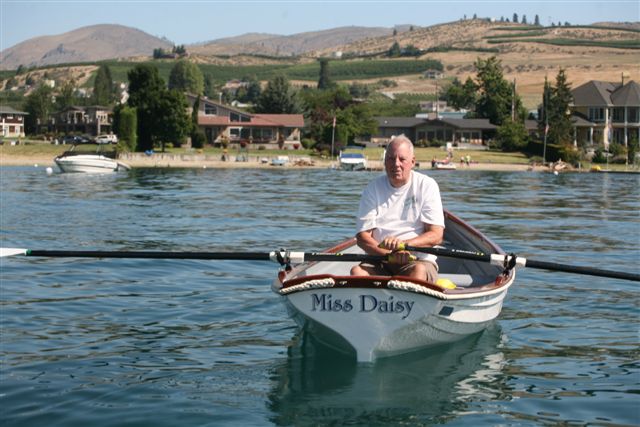 P.S. Some of our fans have uploaded video and photos of their boats to our Facebook page. Have you seen it? Go check it out at www.facebook.com/GHBoats.

We always enjoy seeing your adventures!